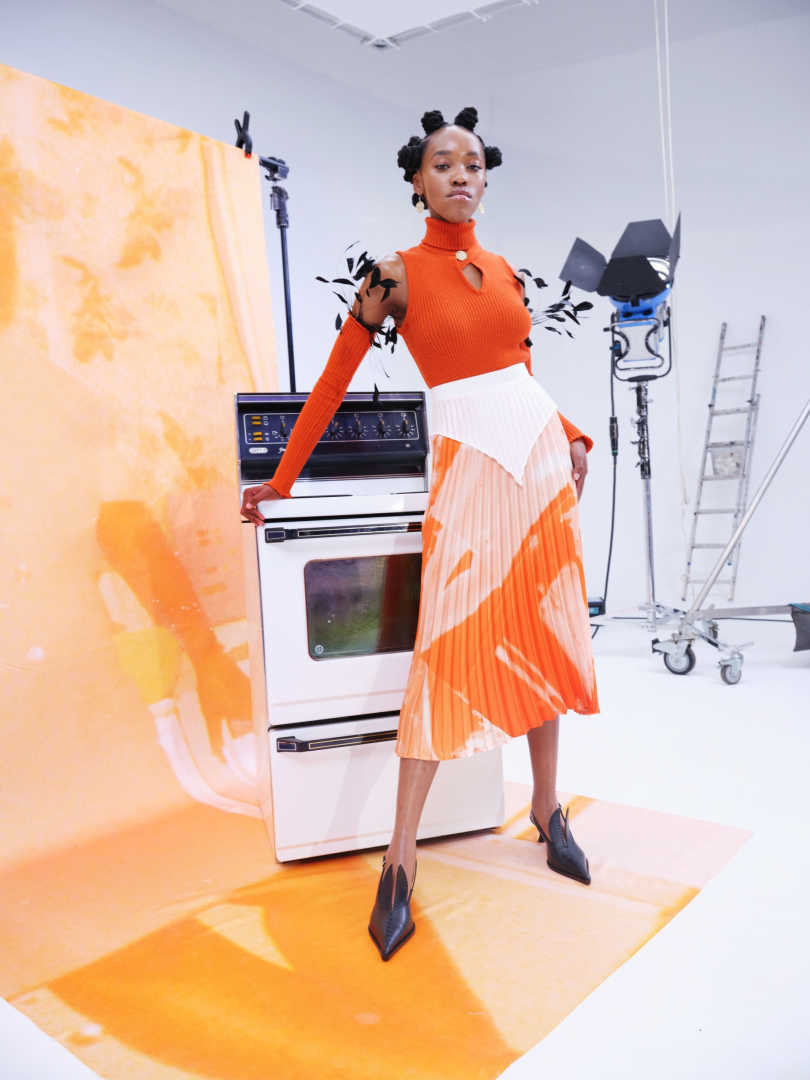 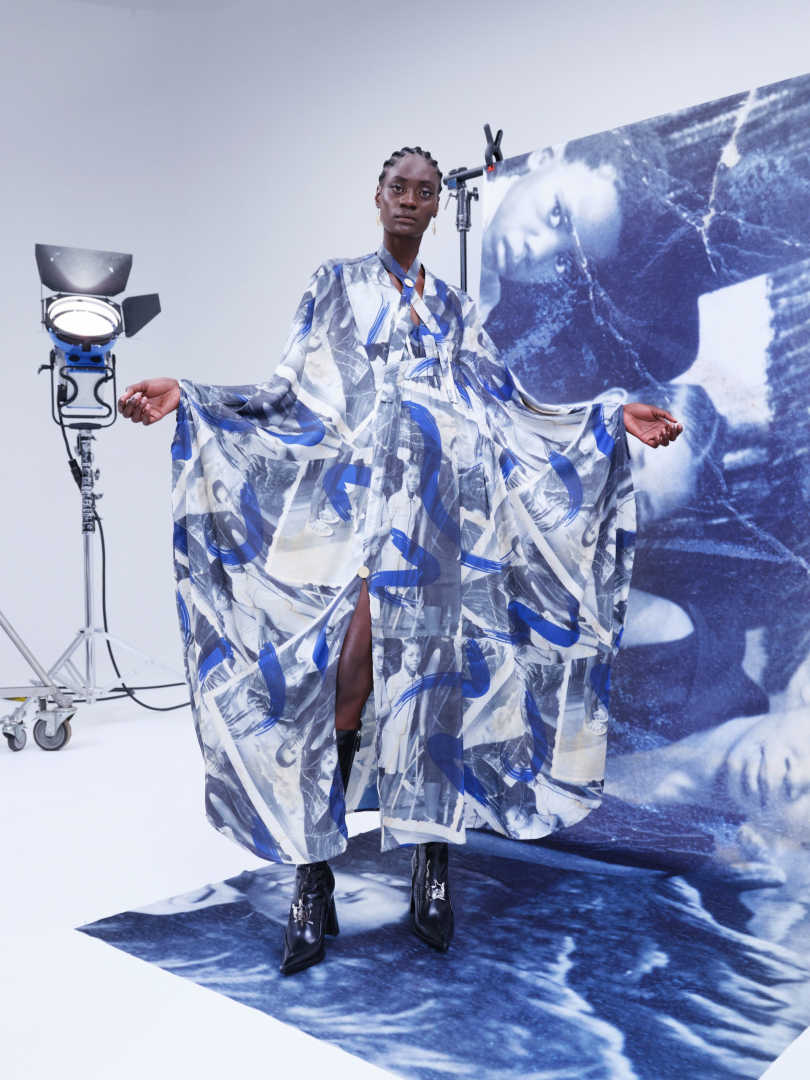 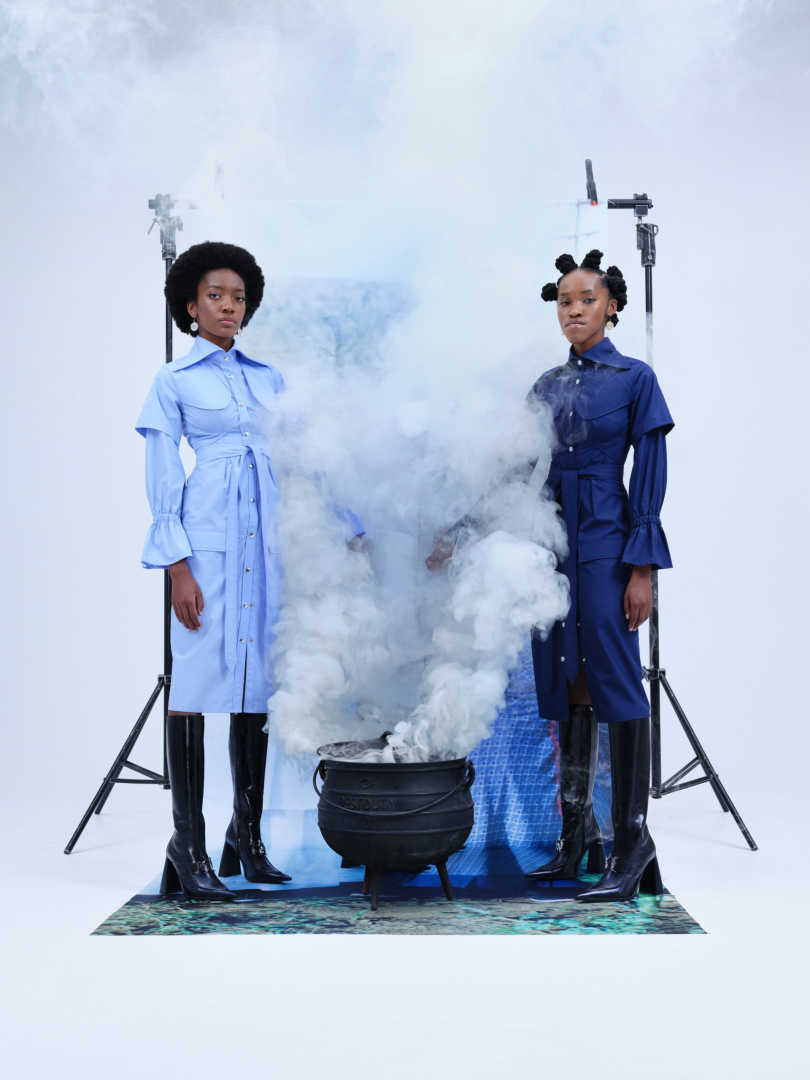 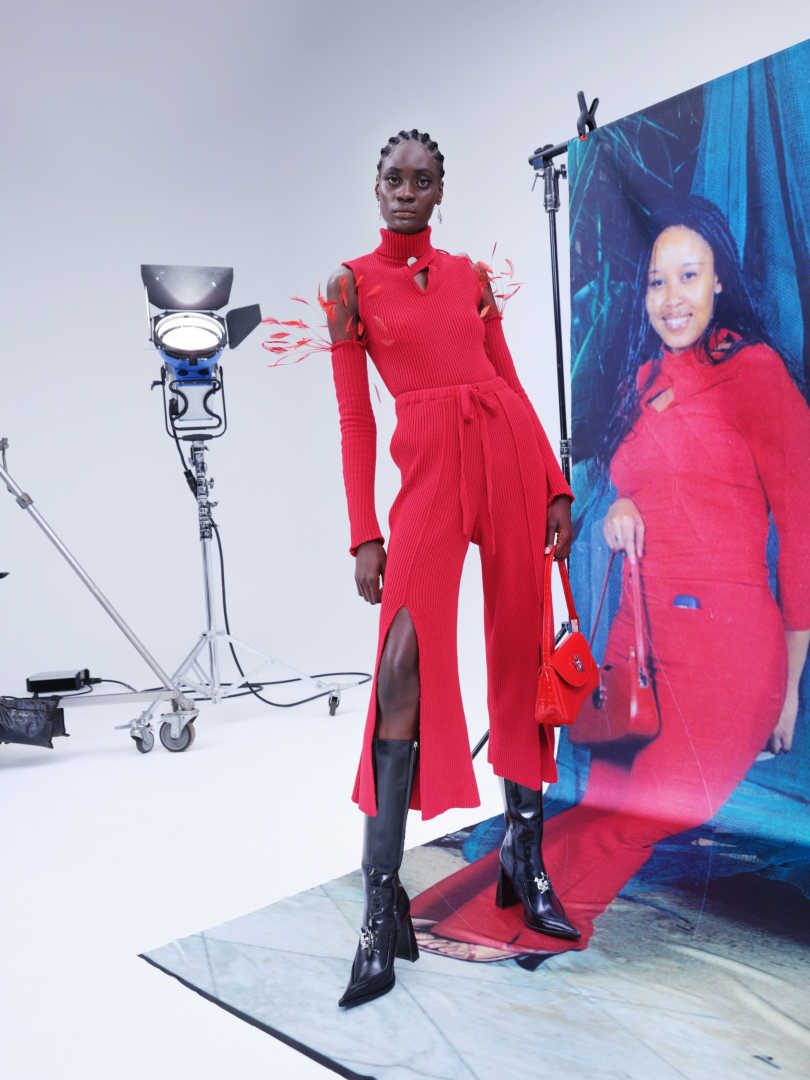 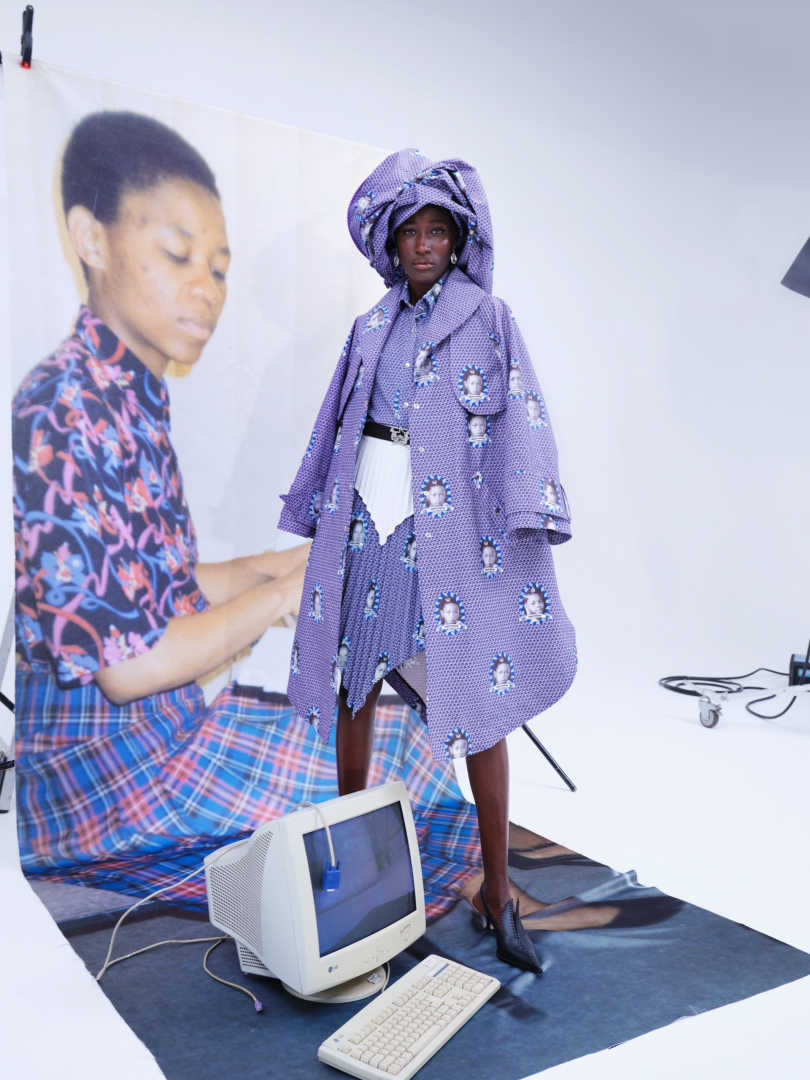 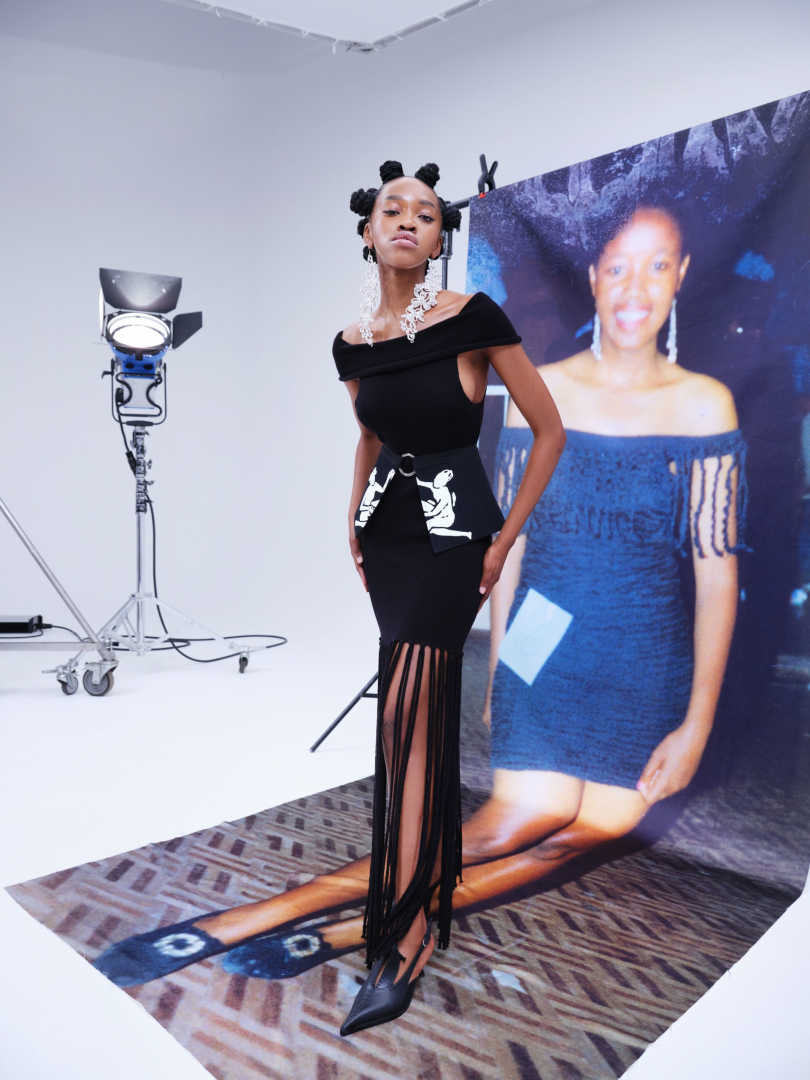 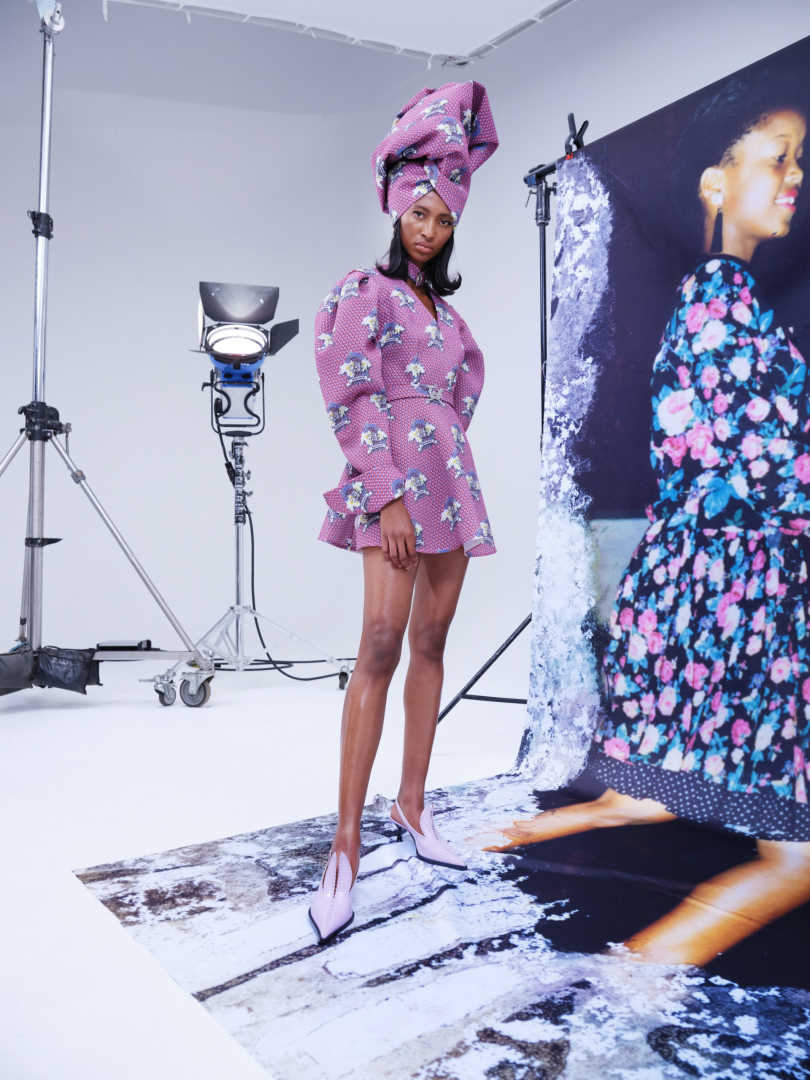 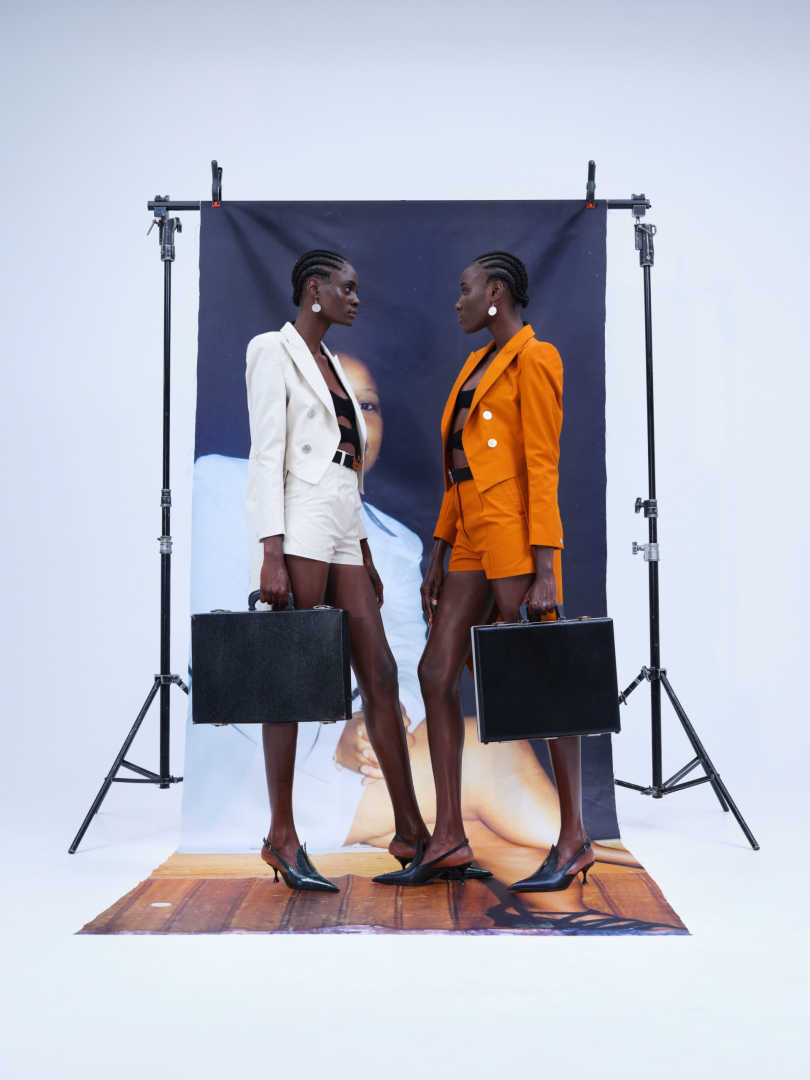 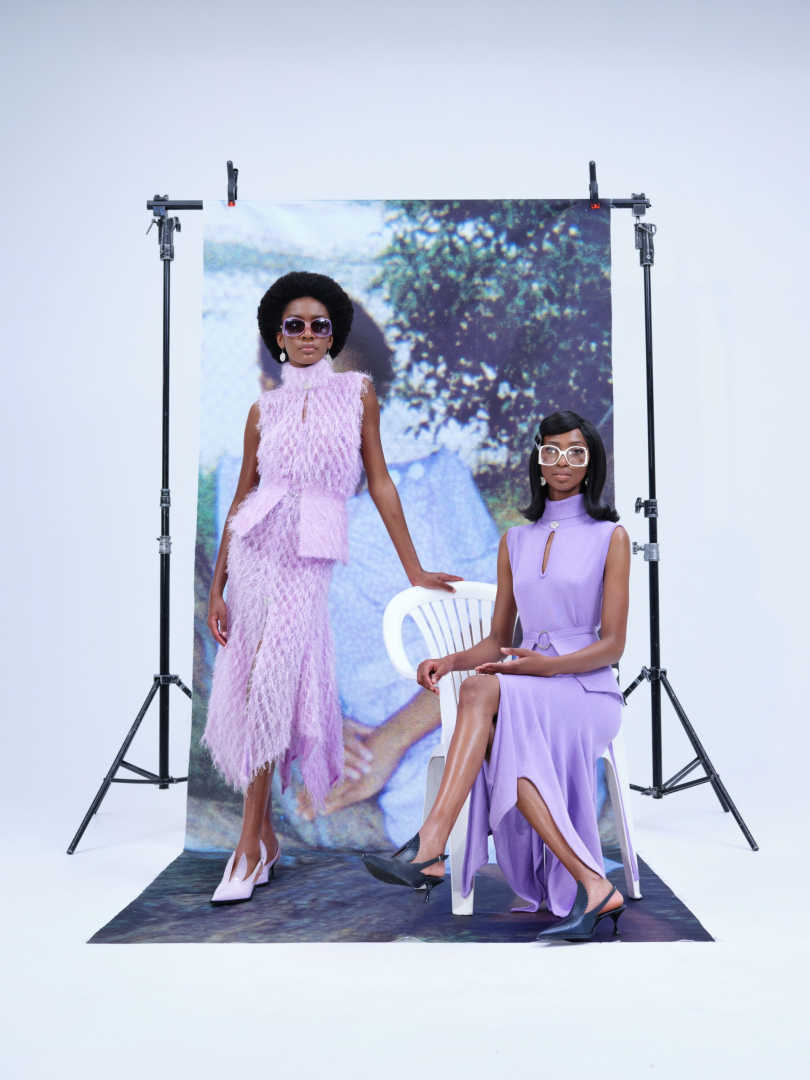 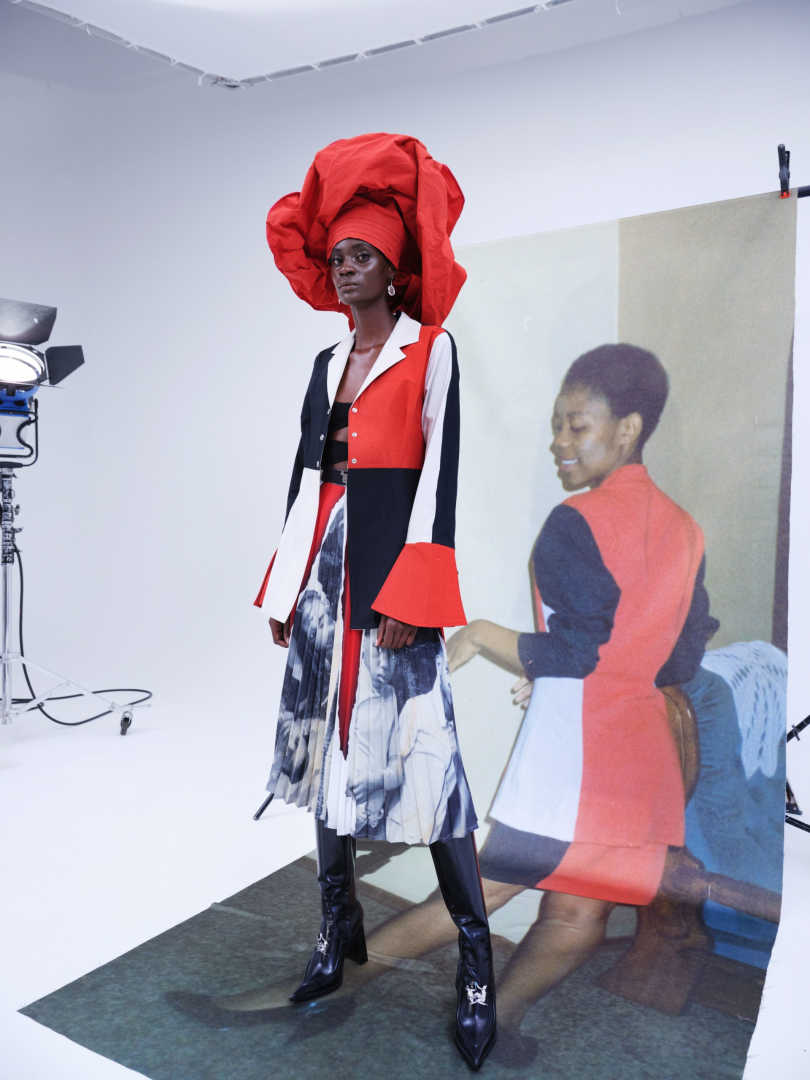 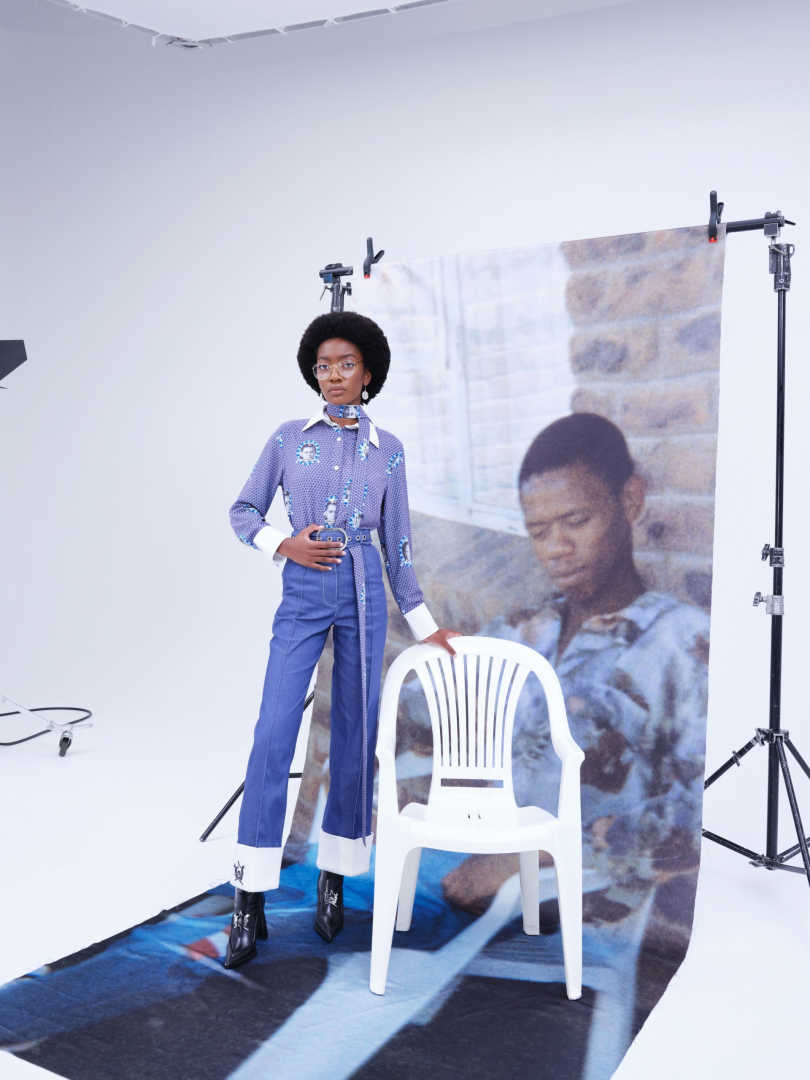 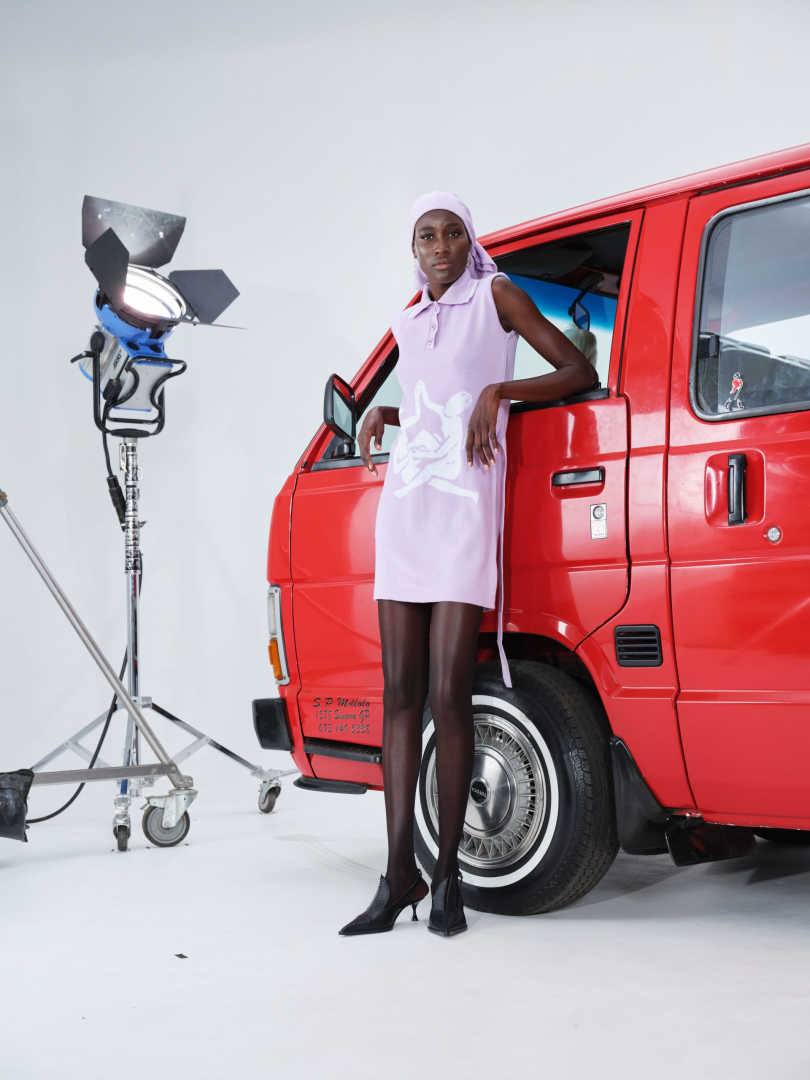 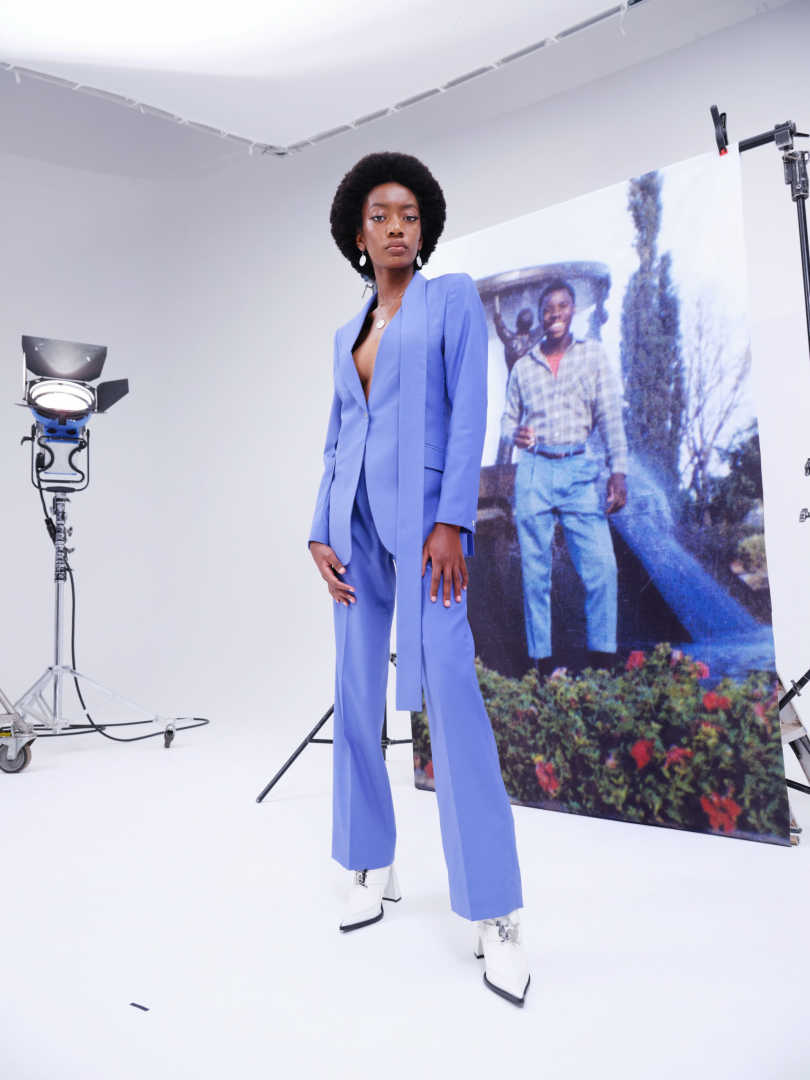 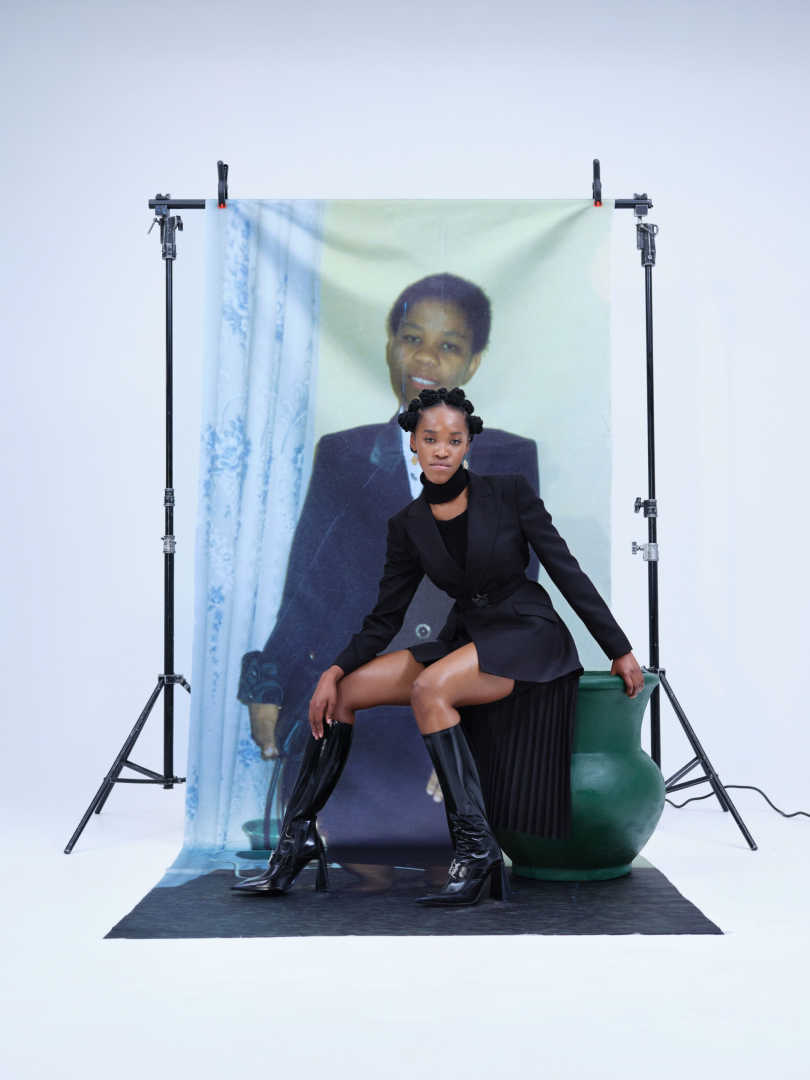 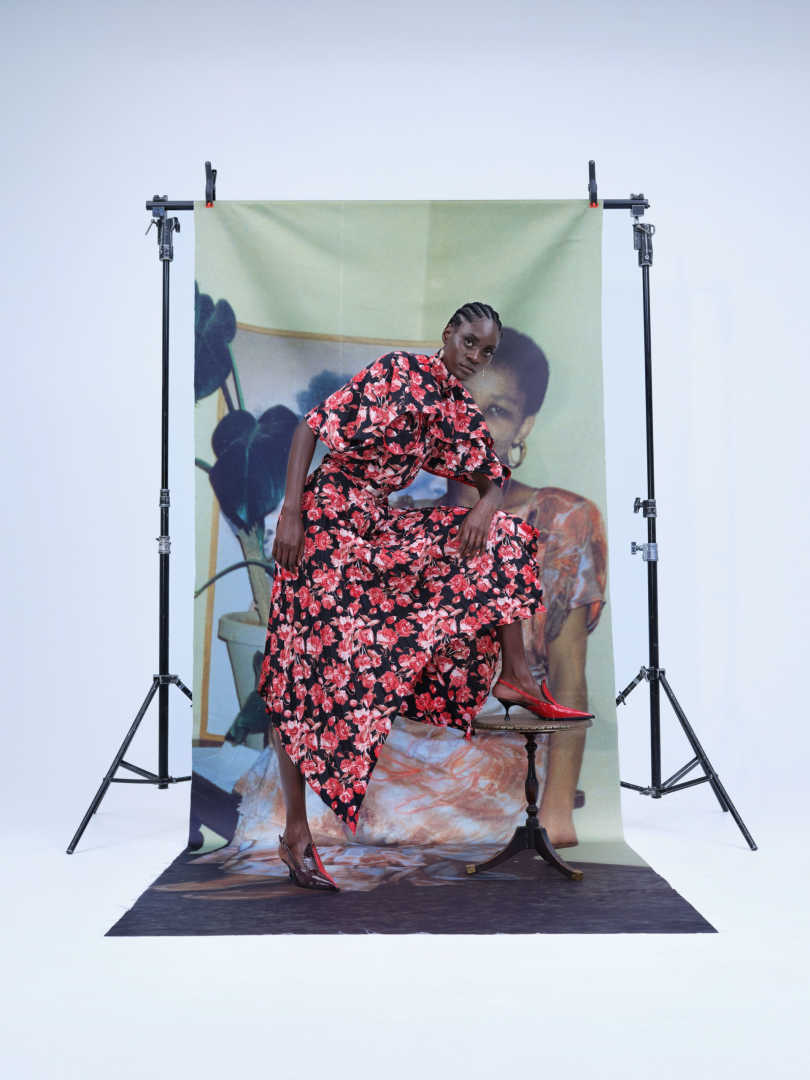 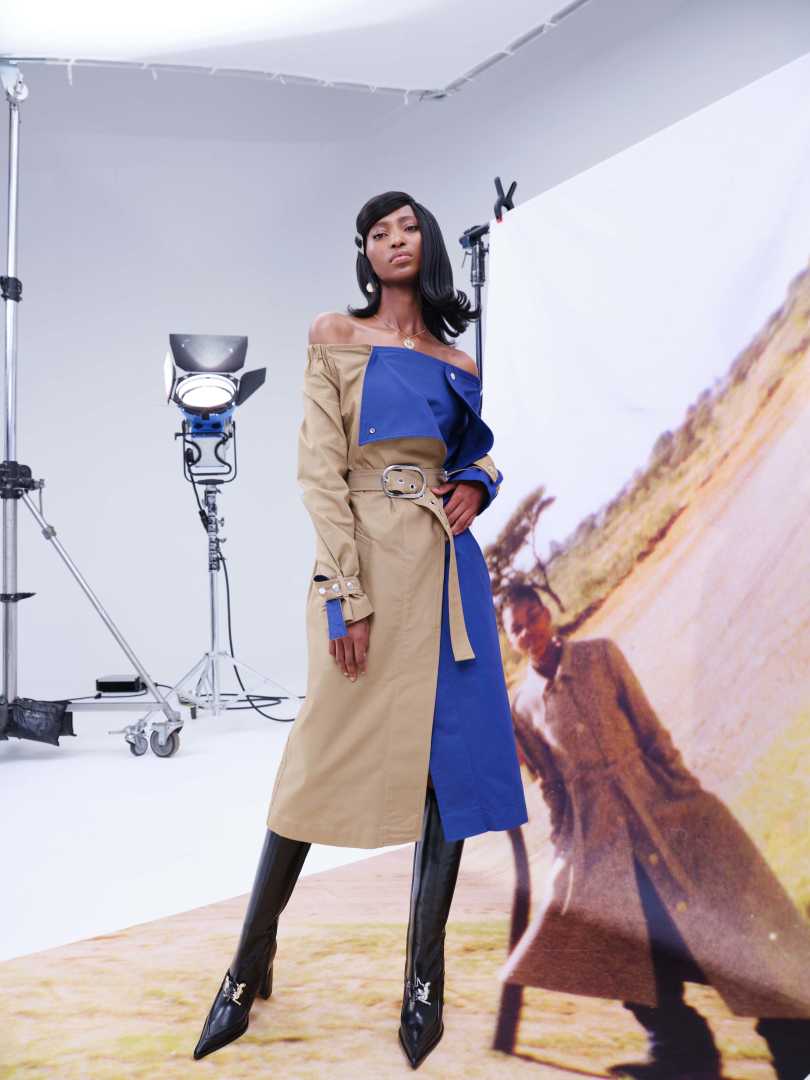 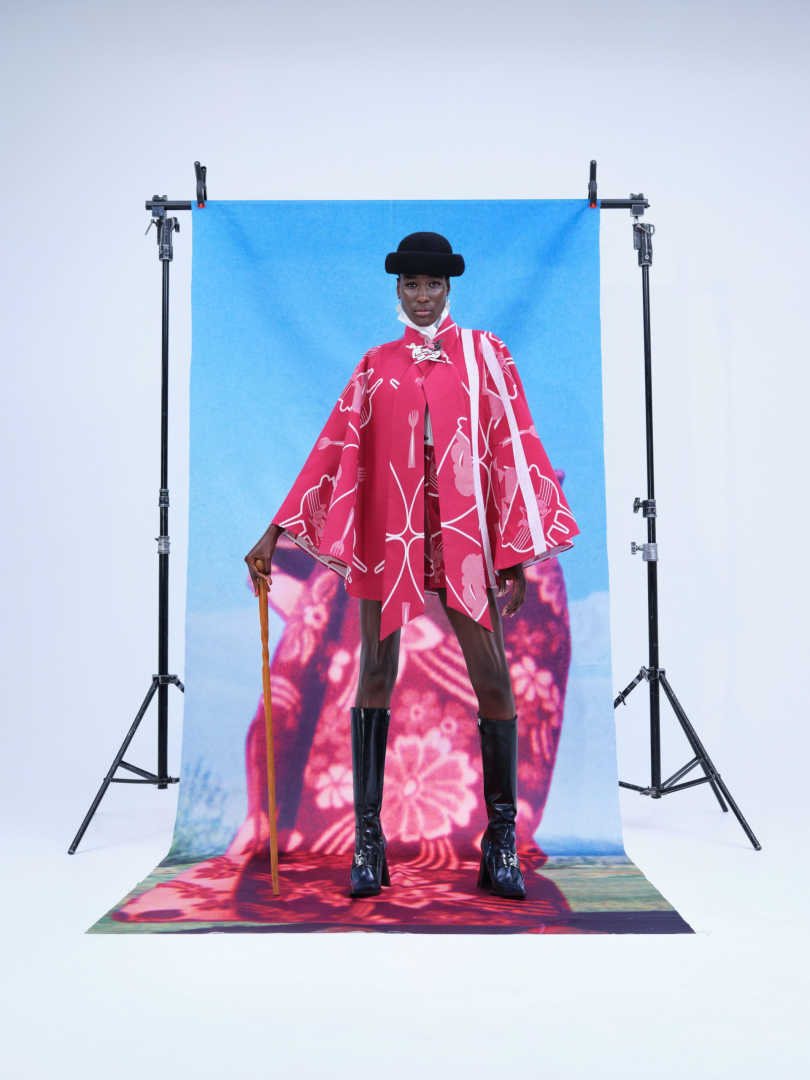 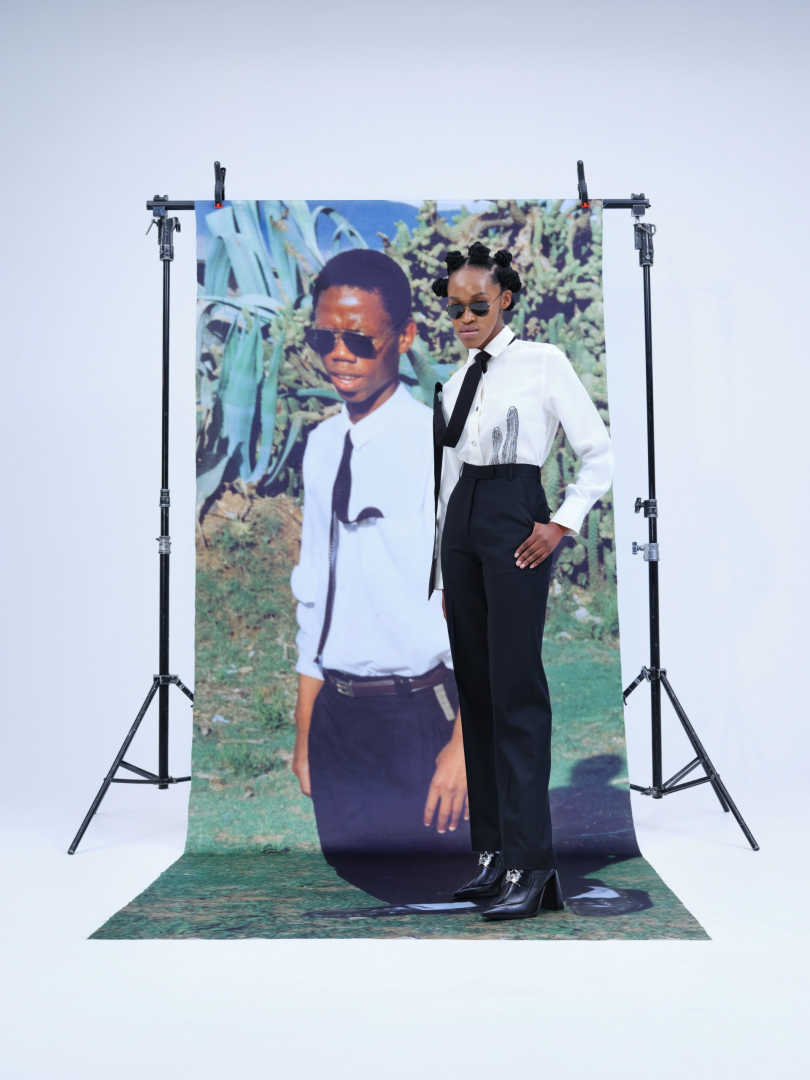 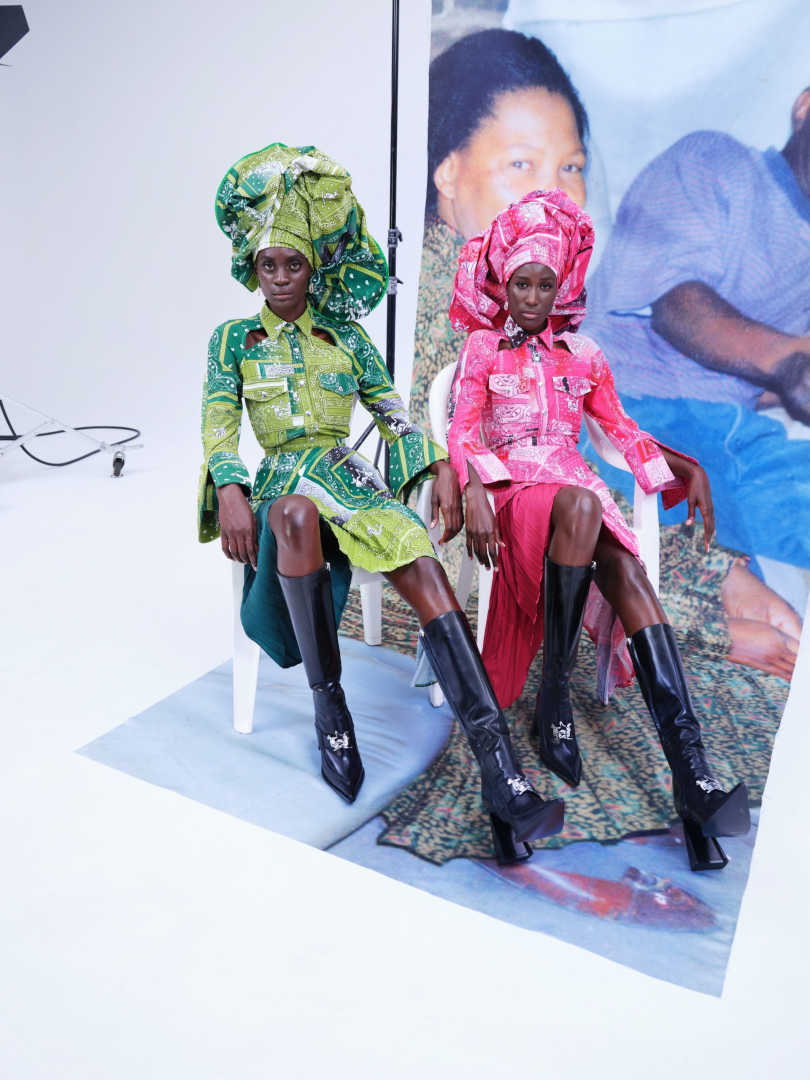 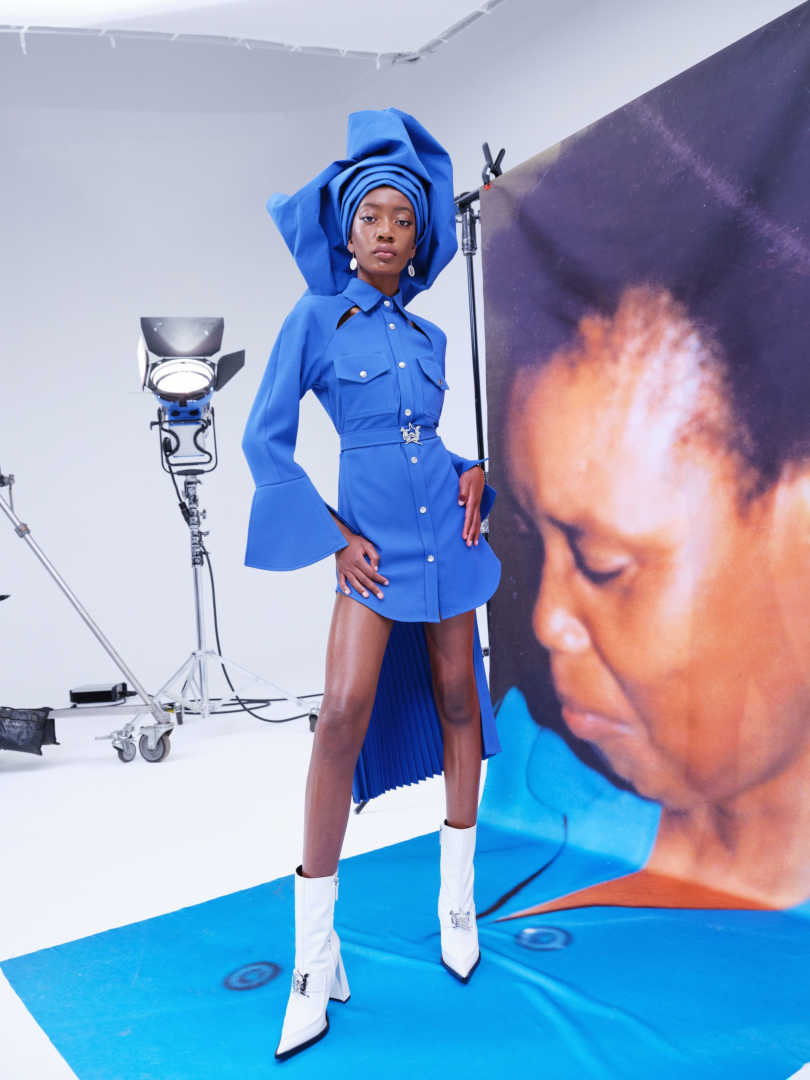 “It’s this idea of memory as a reservoir for optimism” , says Thebe Magugu on his latest women’s collection titled Genealogy, which takes shape as a project that examines old family photos and transcribes them as looks for spring/summer 2022. “I admittedly have been quite miserable. It’s impossible to ignore what is peak weltschmerz and, as creative people, we tend to subconsciously transcribe whatever hangs in the air into output. This season, I wanted to disengage with mounting pressures of having to create work that considers and reflects the times and to create a personal body of work that - even if niche - looks inwards at the part of my life that always gets me through: my family”
Set-up as a roundtable discussion, Thebe Magugu, Iris Magugu - his mother- and Esther Magugu - his aunt - proceed to unpack a box of family photos which illustrate significant moments in all their upbringings. The brand has always cited very specific references and motifs, which are all chronicled and broken down in this documentary.

“The collection pick-pockets a variety of era’s - my grandmothers masterfully pleated skirts and draped blouses from the 1950’s, my mothers leg-of-mutton sleeves from the 1960’s - and her subsequent rebellion in the 1970’s with improbably short skirts, which my family in jest refers to as her ‘2 Centimetre Clothes’ era. In the 80’s, my aunt Esther experimented with localised punk, inspired by the rising star of that time Brenda Fassie - who TIME Magazine had just named ‘The Madonna of the Township’. All these women, living under the same house, sharing and workshopping clothes out of necessity, each developed an interesting and hybridised sense of style, which could oscillate from 1990’s Stealth Wealth to 1890’s Devotion.

Exploring the brands roots, the collection features a prominent print inspired by the Sotho culture’s re-contextualized wax print known as Seshweshwe. Thebe Magugu replaces the iconography often printed on the cotton calico in favour of regal portraits of his own family, who are encased in ornamental ovals step and repeated over the length of the fabric. “The idea of re-contextualization has held my fascination for quite some time, because it intersects ideas of making do with what you have and finding use - even beauty - in objects, structures, words and histories that were meant to take-down and destroy you”.

Our second shoe proposition, titled the After-Tears Kitten Heel, feature prominent ‘ears’ which jut out in front of the shoe, with a hand-stitched border which runs all around its edge. In South Africa, ‘After-Tears’ is known as a celebratory gathering after a funeral. “It’s a tough, feminine shape I have come to associate greatly with my late grandmother Matiego Magugu, and her chic dignity”, says Thebe Magugu. Its sharp toe continues the shape of the brand’s previous season’s ‘Sunday Best Boot’. Accessories this season involve a coin stamped with the brands Sisterhood Emblem, which continues the collection’s theme of heritage, heirloom and the found object. Exaggerated doeks [head-pieces] - favoured at mile-stone events like weddings and wakes - have been done using pieces of left-over fabric from the cutting room floor, created in collaboration with Cape-Town based milliner Crystal Birch.