Below, writer Vuyolwethu Reoagile explores each tribes history and heritage. 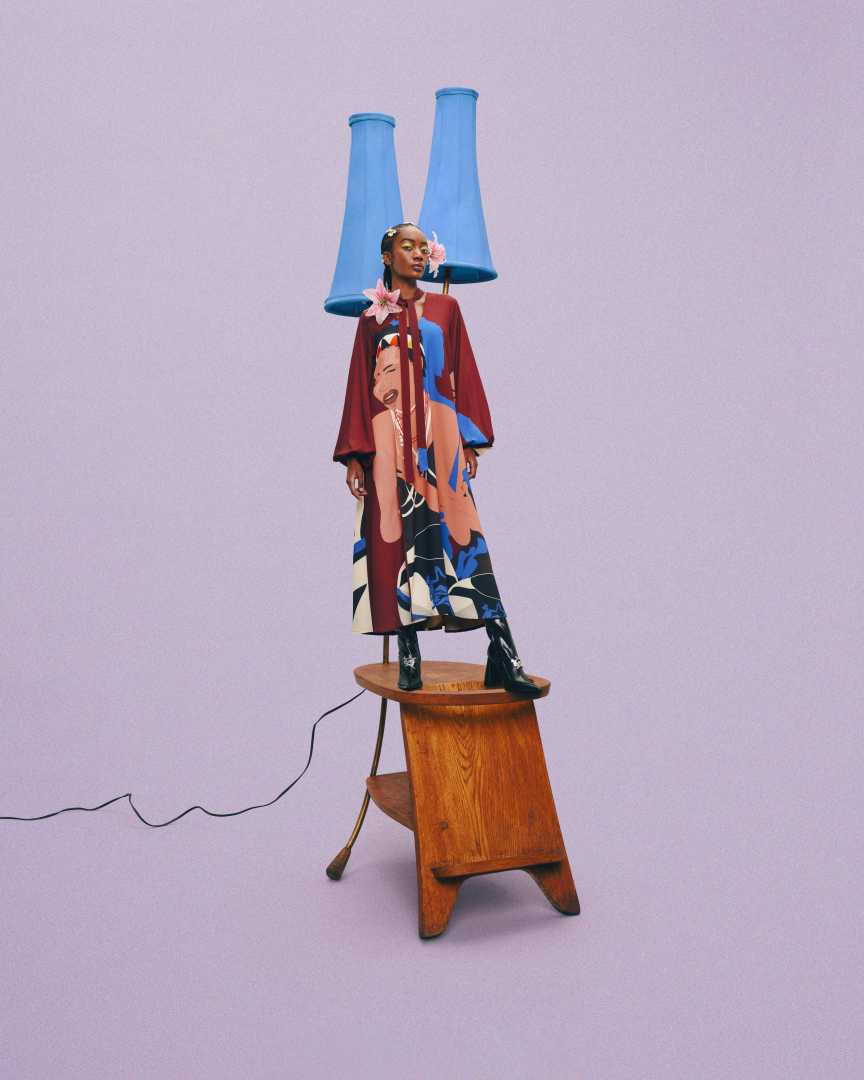 The celestial and regal Batswana of Southern Africa, and are found in Southern & Eastern Botswana and in South Africa - mostly in the Northwest Province and the Free State Province. Batswana can be traced to the Southern region of Africa as early as 600AD and the first written records of the tribe emerged in 1824.

The Batswana are made up of several clans - each with its own totem animal representing an aspect of their ancestry. In ancient times, Batswana observed celestial objects and began to form an ancestral and astrological relationship with the heavens associating the moon (Ngwedi) with divine feminine energy and the sun (Letsatsi) with joy.

The Batswana also honour their ancestors through song and dance. Their music and dance are minimal yet mesmerizing, a melodic channelling of spirits through singing with the incorporation of shakers around the ankles, guitars and other minimal instruments.

As a highly industrious people, elements of trading with Europe and Asia remain influential in traditional attire and crafts to this day. The Batswana are also known for creating intricate baskets, clay items, wooden utensils, and drums as part of their culture. Their traditional attire has always been defined by earthly colours such as brown and red cloth from animal skins, and beads created from seeds and bones. With time, coloured items such as Kgakana material (geometric patterns printed on blue and brown fabric ) and checkered blankets were added for weddings and initiation ceremonies. 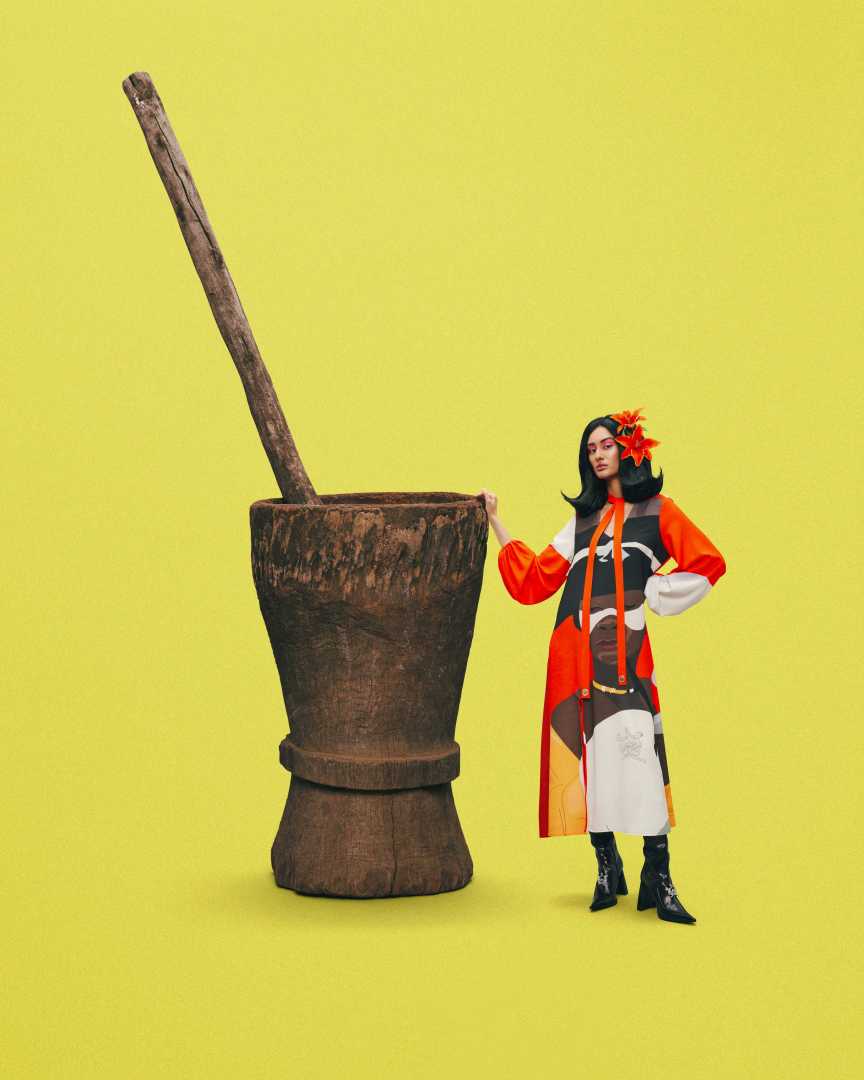 The descendants of Phalo, AmaXhosa, who can be traced to the Wider Cape region of South Africa as early as 7AD; according to oral tradition, the tribe migrated from North Africa to East Africa, and finally settled in South Africa.

AmaXhosa hold Qamata, the creator of all things (God), in high esteem; thus a relationship with the ancestors is very important as they are the direct line to the supreme being. AmaXhosa are symbolic people who value the messages conveyed by one’s ancestry in dreams.

AmaXhosa became known as ‘The Red Ones’ for the use of red and orange ochre; their discovery of ochre allowed them to dye their traditional clothes in these colours. Variations of red continue to be central in the attire of AmaXhosa alongside intricate beadwork with various types of symbolism.

Another defining element is the headdress worn by married Xhosa women as a sign of respect to one’s husband and her in-laws. The pipe is also highly symbolic of a relationship with the ancestors and is of varying lengths; diviners use a longer pipe. AmaXhosa also take pride in painting their faces for special occasions with various patterns known as umchokozo using white ochre. 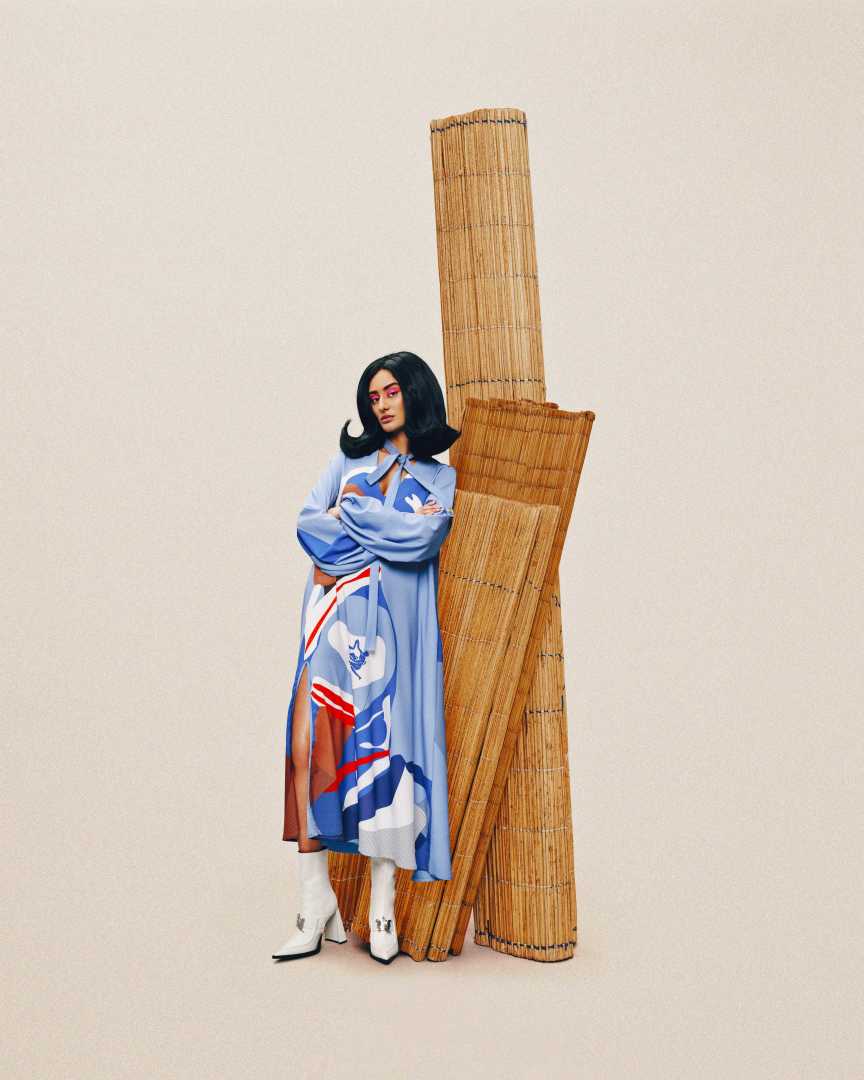 The colour-blocking pioneers, the VaTsonga people of Southern Africa, are said to have settled in Limpopo as early as the 1800s originating from present-day Mozambique. The origins of VaTsonga date back to the days of King Shaka Zulu, when they were known for bartering fabric and beads with Asian and Arabic nations. To this day, they are well-known for their incorporation of bright colours alongside an incredibly spirited nature of dancing and music nurtured over centuries. Their traditional wear is a reflection of their love of ku bombisa (a love of brightness and decoration).

VaTsonga traditional wear is characterised by bright-coloured patterns against bright backgrounds. Traditionally, a bright coloured cloth known as nceka (pl. minceka) is draped over the shoulder/s over a voluptuous underskirt known as xibelani, a tshirt, beads and a fabric belt, as well as a headscarf. VaTsonga women wear these bright colours as an expression of their identity and their inherent ‘friendly and happy disposition.’

The VaTsonga people are also custodians of a unique genre of music known as Shangaan Electro, which originates from Tsonga Disco and Kwaito House. The music is characterised by an extremely fast-paced beat, fluid guitar lines and drumming. Shangaan electro borrows from their traditional music featuring string, wind and percussion instruments. Shangaan Electro beats can go up to 190bpm, and this genre is specifically created for dancing, the hypnotic footwork is very advanced and reflects the upbeat nature of VaTsonga people. 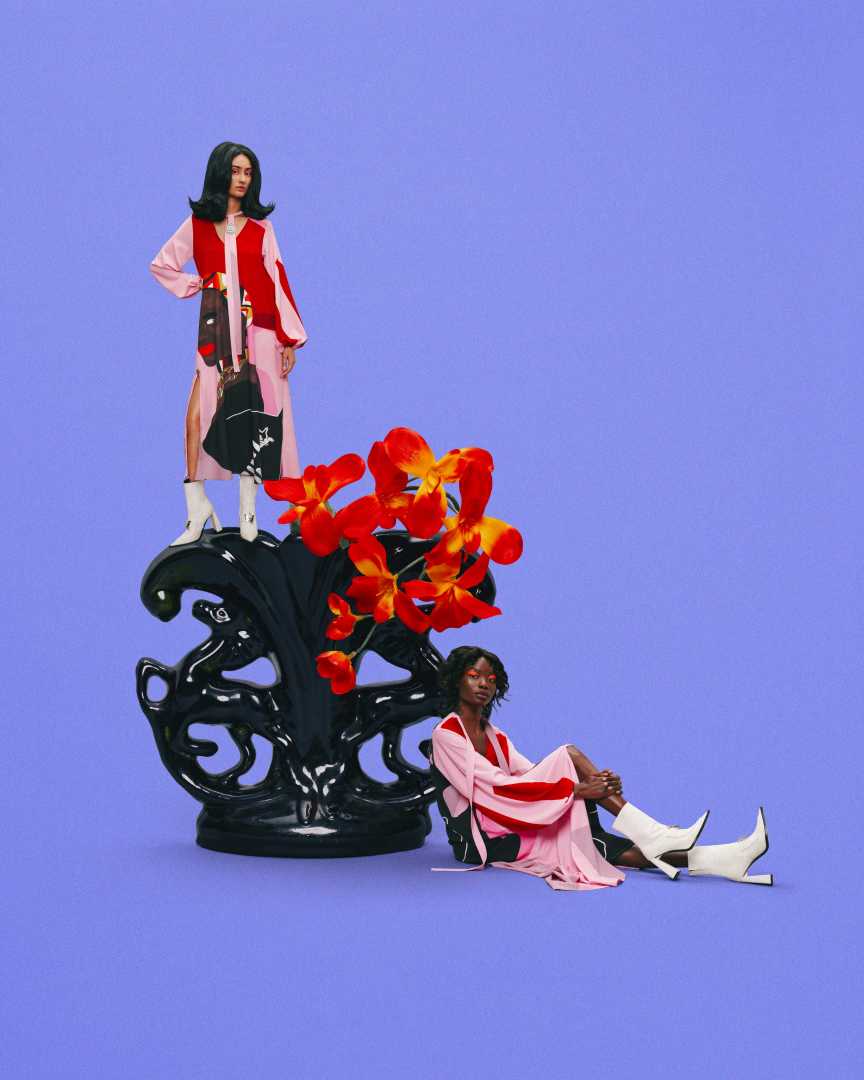 The people of the heavens, AmaZulu, originated from a major clan in South Africa’s Northern KwaZulu-Natal region founded by Zulu kaMalandela in 1709. Shaka Zulu played an integral role in uniting several Nguni clans in the area who migrated from East Africa over the millennia and this solidified the identity of AmaZulu. Shaka’s influence over the nation of AmaZulu crafted a highly organized and militant people who, to this day, are very proud of their origins.

AmaZulu continues to hold a strong belief in their ancestral spirits, AmaDlozi and AmaThongo, as forces that bring divine intervention into the lives of those who venerate them.

Beadwork is highly symbolic to AmaZulu, people of all ages take pride in wearing beadwork with different meanings. When it comes to traditional attire - it’s designed according to whether a woman is single, engaged or married. One of the ways in which a married woman was identified was through isicholo which is highly symbolic of divine feminine energy. Isicholo is a hat with a flaring disk-like shape originally created with human hair, and dyed with a mixture of ochre and fat for a red hue; however, it’s been updated and designed with other types of materials and features beadwork. 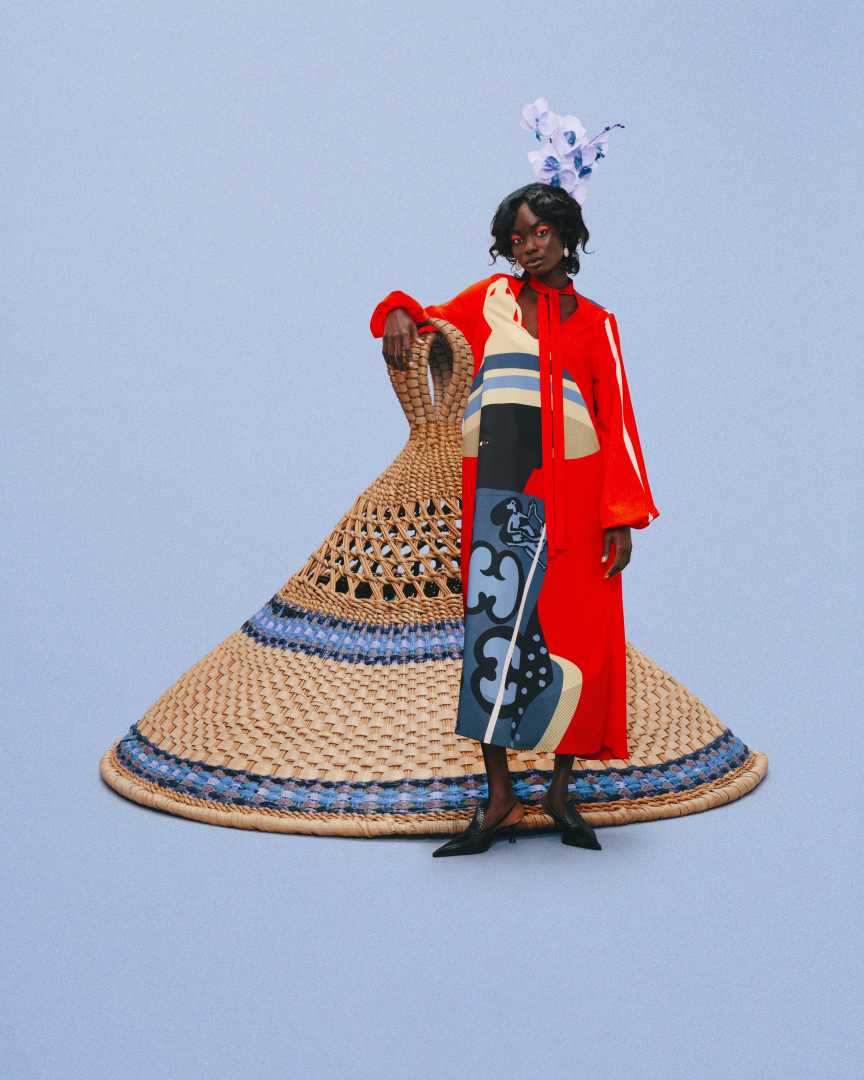 The majestic BaSotho live in Lesotho, various parts of South Africa, Namibia and Zambia. They can be traced back to Phalaborwa and Johannesburg as early as the 8th century. BaSotho have pioneered metalwork and pottery in Southern Africa with their involvement in the industries dating back to the 1300s to the 1500s.

BaSotho believe in Modimo (God), and that the entity is approached through Balimo, the ancestors. They believe in the utmost respect for ancestral spirits to avoid bad luck, sickness and misfortune.

SeSotho is one of the first African languages to be published in the early 20th century resulting in a highly extensive literary catalogue. SeSotho literature features a wide range of dialects, and the most commonly used, to this day, are the Kwena and Fokeng dialects.

BaSotho are well-known for donning a blanket accompanied by a straw hat, Mokorotlo.

Mokorotlo is made from indigenous grass known as Mosea or Leholi. The shape of the hat is said to be modelled after Mount Qiloane, the conical mountain and famous landmark in Lesotho. 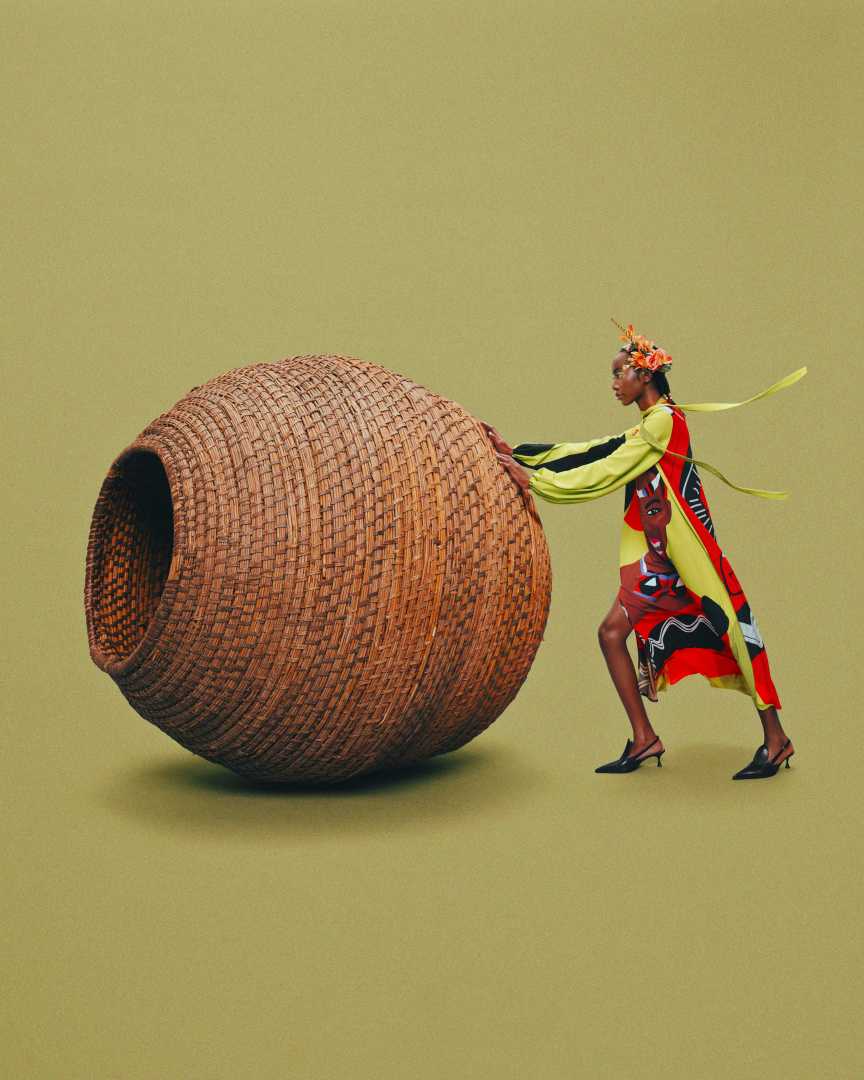 The illustrious EmaSwati are found in various regions of Southern Africa including the mountainous terrain of the Kingdom of Eswatini (formally Swaziland), the Mpumalanga province in South Africa and parts of Mozambique. EmaSwati identity is marked by the twin monarchs, Ngwenyama (Lion) and Ndlovukati (Female Elephant). The nation is named after Mswati II who became king between 1839/1840. EmaSwati originates from Nguni speaking clans who migrated from North-East Africa to South-East Africa in the 15th century.

EmaSwati also believe in ancestral spirits, EmaDloti, who are believed to possess people and influence their health. Some of the most important traditional events are the Incwala & Umhlanga. EmaSwati are highly skilled crafters and artists specialising in pottery & wooden carvings. EmaSwati are also known for their beautiful work in grass weaving.EmaSwati take pride in their traditional attire which is worn at special events; from Emahiya & Emajobo to Sidvwaba & Sidvwashi. 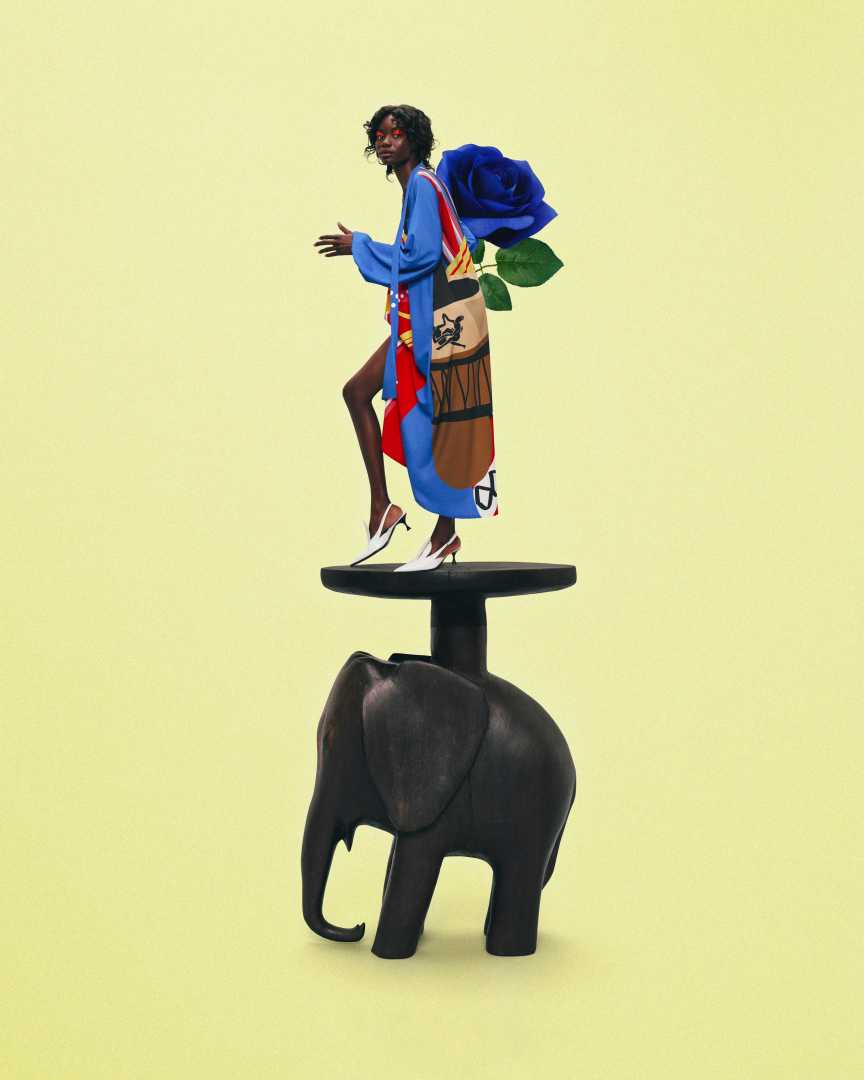 The spirited VhaVenda people can be found in South Africa’s Limpopo province along the Soutpansberg Mountains and in Zimbabwe. The roots of VhaVenda can be traced back to East Africa and they migrated across the Limpopo River during the Bantu expansion. A core foundation of the VhaVenda was the Mapubungwe Kingdom led by King Shiriyadenga in the 9th century; eventually, the empire abated and the first settlement was created in Soutpansberg.

VhaVenda hold very unique customs and traditions from other South African tribes and are quite distinct in their customs and beliefs.

VhaVenda are highly spiritual people who revere their ancestors and water spirits, Zwidutwane. These water spirits are said to reside at the bottom of waterfalls, and offerings can be taken to them to appease them. Artists also hold a special place in the VhaVenda culture as they are seen as direct links to the ancestral realm. Dancing, drumming and singing are central to celebrating rites of passage and connecting with the spiritual realm. 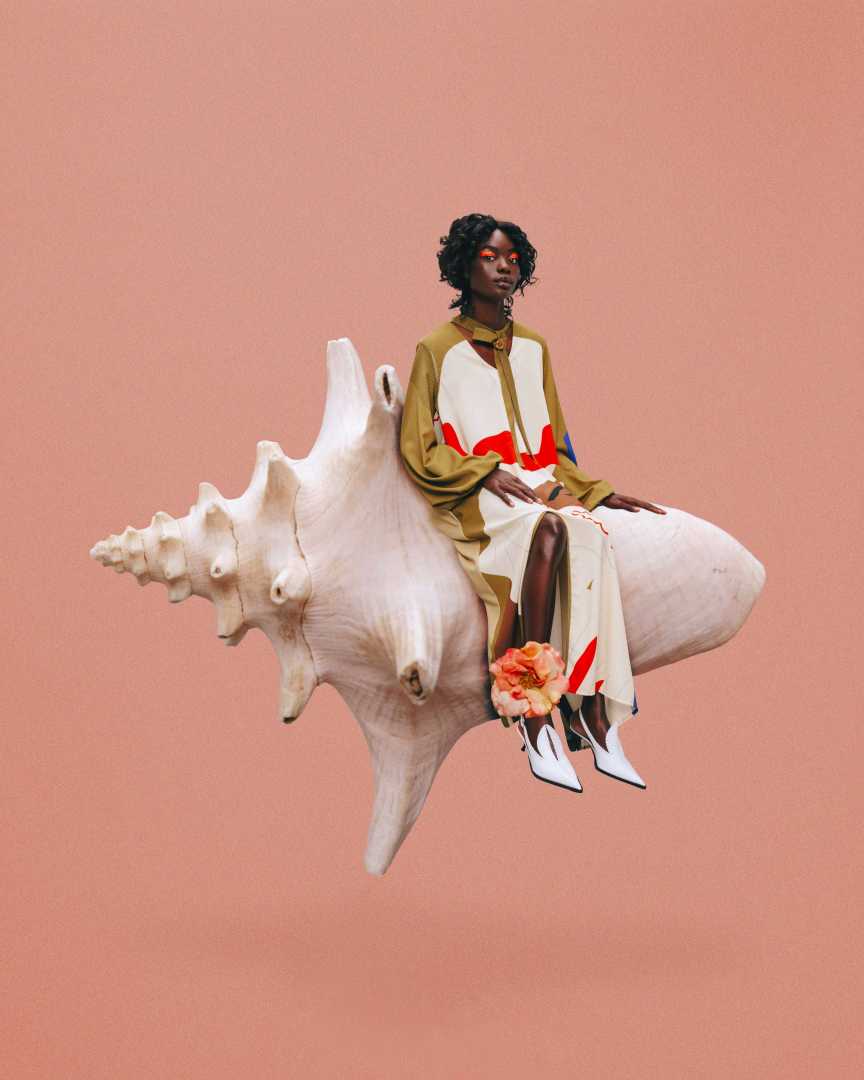 The vibrant BaPedi can be found in South Africa’s Northeastern Provinces; mainly in parts of Limpopo and Mpumalanga. The settlement of the BaPedi in South African areas like Gauteng from Northeast Africa can be traced back to the 5th century. BaPedi mainly identify under a range of totems named after animals to identify which clan they belong to; there are 8 significant totems ranging from pigs to lions, monkeys and bucks.  BaPedi hold their ancestors in high regard as intermediaries between themselves as humans and Modimo/Mmopi (God). The burning of incense and praying (go phasa) connect them to their ancestors along with offerings and making necessary sacrifices if necessary.

BaPedi are creative and take pride in colourful iterations of their traditional wear and crafts. They are well-known for metalsmithing, beadwork, pottery, building houses, woodwork, painting, as well as drum making. Musical melodies created from jaw harps, autoharps, reeds and aluminium pips alongside drums all create the eclectic music of the BaPedi. Music and singing are also seen as an integral part of their culture.

The rich selection of colours and textures in the traditional outfits and beadwork often feature bright palettes such as bright pink, turquoise and yellow. The vibrancy in colours is a representation of how important happiness is to BaPedi.